In a 2008 speech to Google employees in Mountain View, then-San Francisco Mayor Gavin Newson repeated the axiom, “As goes California, so goes the nation.” He was expressing the progressive nature of The Golden State, which has been a national leader on many fronts since Admission Day on September 9, 1850. 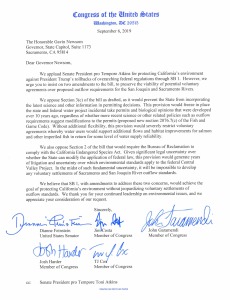 Senate Bill 1 (Atkins, D-San Diego) could reflect California’s independence as a national leader, but unless amended, it will tie us to the past in a way that stymies progressive innovation on environmental projects. SB 1, while championed as a defense for California from potential changes in federal environmental protections, also stands to upend new, unprecedented, Voluntary Agreements (VA). The VAs are bringing warring factions together to improve the ecosystem while at the same time, working toward more water supply reliability for people. The fact that SB1, as written, will destroy the Voluntary Agreements is not disputed. In a recent letter to Governor Newsom, United States Senator Dianne Feinstein, Congressman Jim Costa, Congressman John Garamendi, Congressman Josh Harder and Congressman TJ Cox strongly urged the governor to amend SB1 because it threatens the science-based approach in the VAs for ecosystem and water management in the future.

“We oppose section 3(c) of the bill as drafted as it would prevent the State from incorporating the latest science and other information in permitting decisions.”

The VAs are bringing warring factions together to improve the ecosystem while at the same time, working toward more water supply reliability for people.

But not everyone is in love with the Voluntary Agreements. The Natural Resources Defense Council (NRDC) chose not to participate in discussions last year that hammered out the VA framework among public water agencies, farmers, other members of the conservation community, and the leadership from state and federal agencies.

One can speculate that NRDC, which helped lead the legal charge for the 2008 and 2009 Delta smelt and salmon biological opinions (BiOps), is clinging to the past because to do otherwise would be an admission of failure. Look at overall Delta smelt and salmon populations since then. Have they improved under the BiOps? No, and in fact, things have gotten worse. 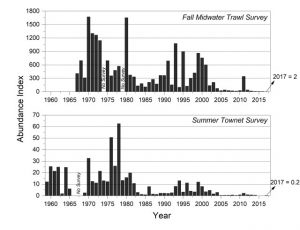 On the other hand, local projects to improve stream bed spawning grounds, restoration of side channels on the Sacramento, Tuolumne, and other rivers, and the voluntary removal of impediments to salmon migration, show significant promise to fisheries. The science from two or three decades ago told us one thing but we’re learning now that much of it was wrong or marginally effective.

New science is showing us a better path forward, a more progressive way for water users and environmentalists to work together to solve a multitude of problems. Unaltered, SB 1 will chain us to the regulatory shackles of the past.

That may be what NRDC wants for California, but it isn’t a healthy future for California’s environment, quality of life, or the people living here who seek to enjoy it.