A regulatory approach has dominated water management in California over the past three decades. This was a significant shift from the development phase of California’s water system, as described by water policy expert Tim Quinn, former executive director of the Association of California Water Agencies. Many believe that policy-makers and water users are making another transition, this time from conflict to collaboration. 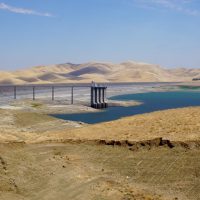 A near empty San Luis Reservoir during the 2012-2016 drought

Significant changes like this, where new or increasing demands lead to policy changes that increase resource scarcity, often generate resistance among the negatively impacted parties. In California, this resulted in warring factions fighting over water supplies, often in a zero-sum game of winner take all, or, more accurately, winner take most. The detrimental effect of the regulatory approach to water management on farms, farm jobs, rural communities, and California’s economy is squarely rooted in dwindling water supply reliability.

It’s important to note that not all water supply shortages are caused by regulatory restrictions. California’s variable hydrology also plays a role; however, the ultimate impact is intensified by the restrictions imposed by State and federal regulatory actions affecting the delivery of water to millions of people and millions of acres of farms throughout California.

At the local level, farmers on the west side of California’s San Joaquin Valley saw the reliability of their water supply contracts fall from about 90 percent in 1989 to roughly 30 percent in the last five years. These water supply restrictions were based mostly on environmental regulations intended to improve populations of Chinook salmon and Delta smelt, however numbers of the listed species continued to decline, despite the imposition of regulations that, over time, have redirected vast amounts of water from agricultural uses to environmental uses.

In an effort to respond to these policies and improve the reliability of their dwindling water supplies, local water agency members within the San Luis & Delta-Mendota Water Authority chose a different path, one of collaboration.

Starting locally, senior and junior water rights holders, along with wildlife refuges, began working together on multi-benefit projects that increased water conservation or modified the timing of water deliveries, providing additional water supplies for farms and flexible water management for the refuges. This collaborative effort helps deliver more water for irrigation in the summer, while increasing the ability to deliver supplies to refuges in the fall when it is needed most for waterfowl habitat.

The benefits of local cooperation are improved by recent policy decisions at the federal level to increase opportunities to deliver water to farms when its available, while at the same time, enhancing protections for endangered fish. 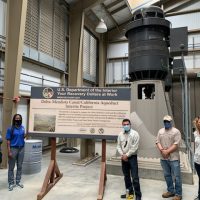 U.S. Fish and Wildlife Director Aurelia Skipwith came to California recently to participate in a tour of California’s federal water infrastructure, the federal San Luis National Wildlife Refuge, and local farms near Los Banos. She brought with her a message of cooperation, unity, and a desire to continue to enhance the regulatory structure to improve the reliability of water supplies and improve protections provided for threatened and endangered species.

Director Skipwith comes from a background in the agricultural industry, has a law degree, and co-founded AVC Global, a company designed to reduce inefficiencies “…in buying and moving agricultural products from the farm to the final use,” according to the AVC Global web site.

Her primary responsibility is administering federal laws, such as the Endangered Species Act, which means her real-world experience developing partnerships, problem solving, and achieving goals while taking into account the people on the front lines where federal laws are implemented is a real asset. It’s clear that she brings a real-world perspective to her role as the head of the Fish and Wildlife Service.

“President Trump’s (October 2018) Executive Order on water brought together agricultural, municipal, and environmental stakeholders to finish the update of the biological opinions,” she said.

That update had begun during the Obama Administration.

“Under a short timeframe, the parties had to work together to make it happen, she said. “President Trump, (Interior) Secretary Bernhardt and the Fish and Wildlife Service helped broker what was an amicable process.”

The end result is a new set of biological opinions that have helped deliver more water to farms and provide better, more science-based solutions to species protections. Instead of the former calendar-based approach to species management, new science generated from 10 years of research into California’s Bay-Delta has improved protections for fish and helped deliver more water to the people who need it. 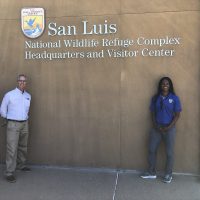 “There is a $1.3 billion backlog of projects like this and $1 billion of it is in refuges. Refuges are public lands that need to be in good shape for the species that depend on them and they also need to be welcoming and accessible for the people who visit to enjoy the wildlife and open space. It’s a blessing to have bipartisan support for it,” she said.

She praised the efforts of local water agencies, including the members of the San Luis & Delta-Mendota Water Authority and the San Joaquin River Exchange Contractors Water Authority for their efforts to forge agreements that include the Fish and Wildlife Service. Those agreements help local water users and the federal government operate more efficiently while delivering water to grow the nation’s food and to protect vitally important neighboring wildlife refuges.