SB 1 is legislation that proponents argue would protect California from potential changes in environmental and labor laws at the federal level. Opponents of the bill expressed concern that it would harm efforts to enact a set of Voluntary Agreements designed to improve both water supply reliability and ecosystem resources. The potential destruction of the Voluntary Agreements is at the heart of Governor Newsom’s announced intention to veto SB 1. 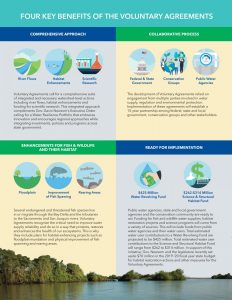 These agreements, the result of cooperation between many large and small water users, includes an unprecedented level of environmental funding. For the first time, farms and other large water users are agreeing to tax themselves to provide hundreds of millions in funding to restore water flows and improve ecosystems.

And you don’t have to take our word for it. Senator Dianne Feinstein, Representative Josh Harder, Representative Jim Costa, Representative John Garamendi, and Representative TJ Cox all expressed their support for the Voluntary Agreement approach to solving California’s perennial water battles. Their efforts and those of more than 180 state and local organizations support the Governor’s attempt to move California water and environmental management into the future. It’s time we break away from old ways of doing things that have worked for no one and enter a new era of cooperation.

It is illuminating that the Voluntary Agreement approach received such wide support during the negotiations over the past several months of the legislative session, and indeed, over many years leading us to today.

Some people are saying that water users “threatened” to walk away from the Voluntary Agreements if SB1 passes. The truth is exactly the opposite. It is SB 1 that threatens the Voluntary Agreements. If this law goes into effect it takes away the very flexibility that made the compromises possible. After decades of work, walking away from the VAs is the very last thing we, or many in the state want.

The list of groups opposing SB 1, and supporting the VAs, includes water suppliers that serve most Californians and many local and the statewide organizations, including the Los Angeles Chamber of Commerce, Orange County Business Council, Construction Industry Coalition on Water Quality, the Valley Industry and Commerce Association (VICA), the Metropolitan Water District of Southern California, Santa Clara Valley Water District, the Turlock and Modesto Irrigation Districts, and many others. And there’s a reason for that. They believe there is a better way to solve water and environmental management challenges than following a path that will lead us to the courts.

That path is a dead end. What is needed is a generational change toward water and environmental management in California. A new approach that focuses on new science, a dedicated block of water for stream flows, a funding plan, and the habitat restoration projects that will revive the ecosystem in many parts of the state. That is the new approach that Californians want and that is what we will get from the Voluntary Agreements. Let’s work together on a new era of cooperation and move into the future together.