The System is Broken

Over the past 25 years there has been considerable controversy over allocation of the Bureau of Reclamation’s Central Valley Project (CVP) water supplies. Allocation amounts vary wildly with one routinely getting 100% while others receive dramatically less. Water project opponents say that’s the result of our water rights system but those rights haven’t changed and the water service contractors are worse off than they have ever been.

Going back to 1994 South of Delta water service contractors received, 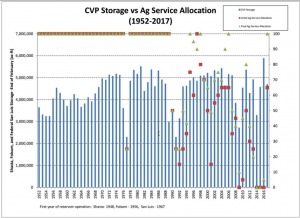 on average, a 43 percent initial water allocation. But if you specifically compare years similar to 2018, where we have in excess of 4.8 million acre-feet of water stored in Shasta, Folsom and the federal share of San Luis Reservoir, the story is much different. In years like 2018 the initial allocation was on average 60 percent, not the 20 percent announced by Reclamation on February 20. On the Eastside, Friant Class I allocations are just 30 percent. Upon learning of the meager allocations Westlands Water District board member Todd Neves questioned how farmers can possibly plan based on such a paltry initial allocation.

So, what’s going on? Reclamation says its conservative allocation announcement is due to uncertainty on how much cold water will be available in Shasta this year for salmon in the Sacramento River. The CVP was designed and built in large part for the purpose of supplying water to farmland but it is now being managed first and foremost for the benefit of fish. That would be fine if these management decisions, mostly driven by the National Marine Fisheries Service, resulted in more fish but that’s not the case. Salmon populations have plummeted along with the reliability of the CVP to deliver water to Sacramento and San Joaquin Valley farms.

What’s the solution? Invest more in the science and the kinds of projects that ARE having a positive impact on salmon populations. The Nigiri Project, a public/private partnership, is showing that flooded rice fields can work for both fish and agricultural water users. Smart predator control and improved salmon habitat in the Delta can help baby salmon make it safely to the ocean where they can grow and return to spawn as adults. The Bureau of Reclamation must consider its obligation under the WIIN Act, which requires the agency to use a science-based approach instead of intuition with regard to water management. Building more water storage projects to help meet California’s future water needs is critical in light of the volume of existing storage that has been lost to serve new demands that were not part of the plan when the CVP was envisioned and built. And encouraging project operators to use the tools and legislation created for flexibility in ensuring that all areas of water management include a balanced approach. After all, water is the foundation for safe, clean and a healthy food production of our nation’s best food and fiber products.