Nutria- Another danger to California’s water

Nutria are back in California 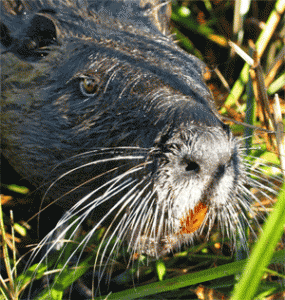 Nutria, an introduced rodent once thought eliminated from California, is the latest of a string of dangerous invasive species wreaking havoc in California’s critically-important Sacramento-San Joaquin Delta.

The nutria, like many other destructive non-native species (large-mouth and striped bass, Asian clam, Chinese Mitten crab, Quagga mussels and Nerodia water snakes, among others) not only threaten the critical infrastructure that provides water, protects our communities, and creates jobs, but they also carry disease, and disrupt natural ecosystems that  threatened and endangered native species rely on.

Acting quickly can help prevent these invasive pests from gaining a foothold.

Why are nutria such an urgent challenge for California?

Ecosystem Destruction/Competition – Nutria consume approximately 25% of their weight daily, burrowing through and destroying the vegetation of wetlands and estuaries as they seek roots, plant stems, and rhizomes to eat. They compete with native species for ecosystem resources, while spreading parasites and pathogens that affect native life.

Water Quality Degradation – In addition to excavating burrows, and eating plant stems and roots, nutria often disturb the ground cover that protects waterways from silt and debris during the winter.

Public Health Threat – Nutria are known to carry pathogens and parasites that can infect not only local Delta wildlife, livestock, and pets- but also humans.  Nutria can carry bacteria that cause tuberculosis and septicemia, as well as blood flukes, tapeworms, liver flukes

What is a nutria? 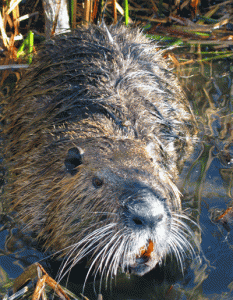 The nutria, called a coypu outside of North America, is a semi-aquatic rodent of unusual size- particularly large for a rodent, they are typically about 12 pounds, but can grow to be between 15 and 20 pounds. They are native to South America.

The nutria reproduces year-round, and reach maturity quickly. While each mature female can carry up to three litters per year, each litter has on average 5 young, with as many as 13 not being uncommon.

Nutria, like other non-native species, are a critical threat to the riparian ecosystems needed to promote recovery of endangered and threatened species in California.

If you see a nutria, report it to the State of California online at: https://www.wildlife.ca.gov/Conservation/Invasives/Report

For more information on Nutria:

For more information on other non-native species in California: