Invasive Species in the Delta: +1?

Another invasive species is threatening to invade California’s Delta. Joining a long list of non-native & invasive species damaging ecosystems, degrading infrastructure, and hurting wildlife, Nutria have been found near the ailing Delta. 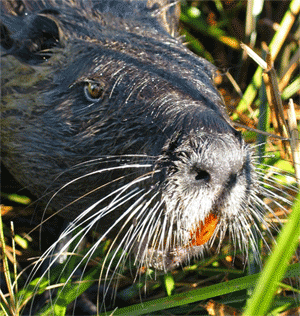 Past invasive non-native species that have found their way into the Delta, like water hyacinth, Chinese mitten crabs, and American Bullfrogs remain persistent challenges, bringing a host of problems for native species, particularly those already threatened or endangered.

Not content to just compete for food and habitat, many invasive species also introduce parasites and disease, or actively prey on native species like Chinook salmon and the Delta Smelt.

Nutria, are a non-native species once intentionally brought into California (for fur) like large-mouth bass (recreational fishing), and American Bullfrogs (as food) for the purposes of economic development. Today, they are widely known to threaten native species by damaging habitat, degrading infrastructure, and introducing disease.

HOW CAN CALIFORNIA HELP THE DELTA?

There is hope for the Delta, bolstered by emerging science and an understanding that more than just increased water flows are needed for healthy ecosystems. Identifying the problems that plague California’s native landscapes is the first step in determining a sensible course of action to correct them.