A Better Solution for Drought Resilience

The highly respected Legislative Analyst’s Office (LAO) released a report this week that provides guidance and recommendations on water-related spending by the Governor and the State Legislature. The report cites drought-related spending priorities from the past as well as current proposals, and makes a number of recommendations contrary to the current direction of California’s executive and legislative leadership. 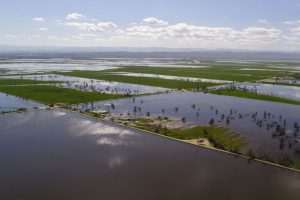 In short, the LAO says that the current, $750 million drought response spending proposal does not address the immediate needs of the drought because it won’t result in an immediate increase in the water supply or in a reduction in water use.

“The LAO report shows While the Governor has presented his $750 million package as being for drought response, most of the proposed activities would not address conditions this summer and fall. This is because the majority of the activities would not result in an immediate increase in water supply or reduction in water use, or respond to emergency needs.”

In contrast, according to the report, “the majority of the proposed activities would focus on longer‑term efforts that might improve the State’s and local communities’ abilities to respond to future droughts. Specifically, both the infrastructure projects that would be funded in urban and small communities, as well as many of the water conservation initiatives and habitat improvement projects, likely would take at least a year and perhaps multiple years to implement.”

Preparing for the future is always a good idea. That’s why smart individuals have both a checking and a savings account. While the LAO praises the Governor for long-term drought resilience, its report highlights the lop-sided priorities where water storage projects account for only $30 million in proposed spending, or about six percent of the total.

“As shown in Figure 2, the Governor dedicates only $30 million from his new proposal for water storage projects. These funds would be used for groundwater recharge projects related to implementing local groundwater management plans in accordance with SGMA. In the context of the changing hydrology described above, this is not a particularly large level of spending.” 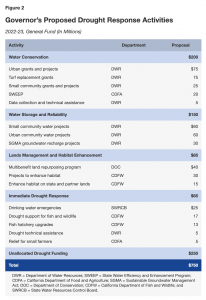 Groundwater storage projects also provide benefits beyond the obvious, such as developing both built and natural infrastructure such as canals, flood bypasses, and designated recharge basins—including farm fields—to direct runoff and floodwaters onto land where it can percolate into the ground to be used later. In addition to potentially restoring some existing groundwater deficits (and mitigating associated negative impacts) and increasing the water supply upon which farmers and residents can draw during dry periods, such projects often have the co‑benefit of reducing flood risk. As such, increasing available groundwater storage and opportunities to capture water runoff in managed aquifer recharge projects might merit additional investments beyond what the Governor proposes.

“The Legislature could also consider a package that provides comparatively more funding for groundwater recharge and storage projects, given their potential to help increase water supply, address groundwater deficiencies, and improve flood control.”

The LAO report has it right. More emphasis on capturing water during wet years and getting it into storage, is the most effective way to address immediate drought needs and dry years in the future. Both agricultural and urban water users have made great strides over the decades in water conservation.

Shifting the focus of water policy and project financing toward more efficient stormwater capture and using State surplus and federal infrastructure dollars is the right choice at the right time.