CFWC Executive Director, Mike Wade, appeared on China Central Television (CCTV) recently to talk about California’s drought and the need for further investments in California’s water supply infrastructure. Also appearing in the story were San Joaquin Valley farmer, Joe Del Bosque,, Almond Board of California President and CEO, Richard Waycott, and Caitlin Boyer of the Department of Water Resources. A transcript of the voice-over is below. Images and video clips from the story are here: https://bit.ly/3D4k7Y0 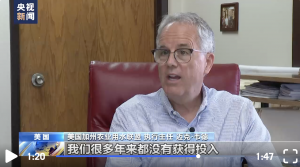 VO:Recently, the western region of the United States has experienced continuous high temperature and dry weather. California, located in the western United States, is an important agricultural state, where the production of various crops accounts for an important proportion in the United States and even the world. The continued high temperature and drought this summer have brought severe challenges to local agriculture. Recently, a CCTV reporter visited farms in central California.

VO:Joe Del Bosque’s farm is located in Joaquin County, California’s central valley. This farm was founded in 1985 and now has 2,000 acres (about 810 hectares) of land. Due to the continuous high temperature and dry weather and the shortage of agricultural irrigation water, the planting situation here is quite bleak this year, and many vast fields are left fallow. Joe’s farm is often able to grow at least five crops every planting season, but due to the severe high temperature and dry weather this year and the lack of water storage the previous year, he only planted three crops this year: melons, almonds and cherries.

VO: Due to factors such as uncontrollable natural precipitation and insufficient popularity of rainwater harvesting technology, agricultural planting in California generally relies on the snow pack of northern mountains, and in the coming year, the agricultural irrigation water is obtained according to the advance allocation.

Standup: Due to the continuous reduction of water storage in the upstream reservoir, the water level of the canal called St. Louis, which is mainly used for agricultural irrigation, has been below the safety line, and eventually the diversion canal that flows to the farmland is also seriously short of water.

Standup:As indicated on the farm side sign, no water means no job, as is the case with Joe’s farm, which has suffered from a shortage of water for agricultural irrigation due to extreme heat and drought this year. The number of workers can only be one-third to one-half of previous years, which has caused many people to lose their jobs.

VO: We drove about 50 kilometers north to the St. Louis Reservoir, which provided water for Joe’s farm. This is the largest reservoir in the United States that has no tributaries and is completely converged by artificial water pipelines, providing agricultural water for thousands of farms in central and southern California and other downstream areas.

VO:We can see the dire situation California agriculture is facing this year in a chart that records the annual water storage capacity of the St. Louis Reservoir, which is only 47% full. With less than half of the water in the reservoir, many farms are left to find their own solution.

VO:In addition, because the continuation of the new crown epidemic has brought severe challenges to global logistics, for agricultural products, the value of agricultural products accumulated in warehouses or in containers at port terminals can only be depreciated again and again. The impact is particularly severe for crops such as California almonds, which are exported in large quantities.

VO:The 2022 drought will cost the U.S. economy more than $3 billion, according to the California Agricultural Water Alliance. The inflationary pressure brought by the tight global supply chain to various countries is also directly reflected in all aspects of agricultural production. Transportation and packaging costs are increasing, which will eventually be passed on to consumers, allowing consumers to directly feel the price increase.