What is the Kern Water Bank?

The Kern water bank is a groundwater recharge facility in Kern County. It stores water for future use that has been imported from the Kern River and other parts of the state. It is operated by an organization of public water agencies called the Kern Water Bank Authority that includes public irrigation districts, a public agency and a mutual water company.

How did the Kern Water Bank get started?

In the early 1980s, California’s Department of Water Resources began exploring the possibility of developing a State Water Project (SWP) groundwater storage facility in Kern County, which it called the Kern Water Bank. The bank was to be made up of different recharge regions across a large section of Kern County.

The largest of these regions, the Kern Fan Element, was to be developed first, followed by local projects developed in partnership with several water districts in Kern County.  In 1988, the Department purchased approximately 20,000 acres of land in Kern County.

During the late 1980s and early 1990s, the Department of Water Resources (DWR) sought to complete feasibility studies on the Kern Fan Element.  In addition to these expensive feasibility studies, DWR was confronted by legal and political challenges to developing the water bank.

In 1993, DWR recognized that changes to water management in the Sacramento-San Joaquin Rivers Delta including endangered species and water quality concerns would limit the ability to use the property as intended. Work on feasibility studies and design was stopped.

In 1994, DWR and some of the SWP Contractors involved in the project met in Monterey, CA for mediated negotiations regarding the water bank and State Water Project operations.

What is the Monterey Agreement/Amendment?

The agreement made between DWR and the SWP Contractors led to SWP contractors surrendering more than 14.6 billion gallons of water allocations (worth approximately $314 million in 2016 dollars.) The agreement, which modified the long-term contracts that cities and farms have for delivery of water from the State water Project is known as the Monterey Agreement.

The Monterey Agreement required that the changes be ratified by the public water agencies’ elected Boards of Directors before April of 1995.

The Monterey Amendment is the collection of changes made to the State Water Project Contracts resulting from the Monterey Agreement.

How much water can the Kern Water Bank recharge into the groundwater aquifer?

The water bank can recharge up to 72,000 acre feet per month 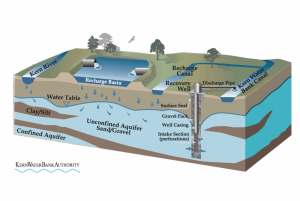 (756 million gallons/day) during the beginning of a recharge cycle. As soils become more saturated, the recharge rate may slow to 30,000 acre feet per month.

There is no set maximum volume that can be recharged into the aquifer on which Kern Water Bank sits, but only about 1.5 million acre feet is readily accessible to the Water Bank’s recovery wells.

What wildlife benefits does the Kern Water Bank provide?

The Kern Water Bank, occupying approximately 35 square miles, is near the Pacific Flyway and provides critical habitat for wildlife. The Water Bank  has been implementing the Kern Water Bank Habitat Conservation Plan/Natural Community Conservation Plan since 1997 in coordination with the efforts of the California Department of Fish and Wildlife and the United States Fish and Wildlife Service.

Check out this slideshow of wildlife found at Kern Water Bank.

Learn about other Groundwater recharge projects by clicking here.