The average American household is spending $3,820 less for food each year in comparison to their counterparts around the world. 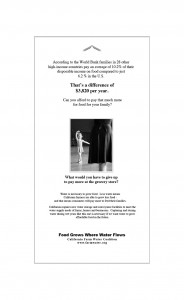 A CFWC study compared spending habits of American households with those in 28 high-income countries across the globe.  U.S. households spent approximately $5,945, or 6.2 percent, of their disposable income on food and non-alcoholic beverages each year.  That number climbed to $9,765, representing 10.2 percent for foreign incomes.

Farmers are playing a pivotal role in keeping food costs down for families worldwide and especially here in California.

According to California Department of Food and Agriculture and Department of Water Resources statistics, California farmers have increased their production by 89 percent from 1967 to 2000 while only using 2 percent more applied water per acre.

How many acres a farmer plants is in direct response to market demands but when water supplies are reduced, then less acres are planted and the economic theory of supply and demand takes over for the consumers pocketbook. That is why a reliable supply of water is so important to our farmers.

Data from the World Bank was used in selecting the countries.  All of the data from the foreign countries was converted to 2005 U.S. dollars.

On a percentage basis, households in high income countries are spending about 64 percent more on food and beverages compared to the U.S.

Families are saving almost $4,000 in food costs compared to others around the world.  If the cost for food went up, then that means there would be less money to spend on other items such as entertainment, dance lessons, vacations and more.

Wade explained that farmers are increasing their water use efficiency with the introduction of increased technology, such as micro irrigation systems and even the use of satellites to monitor field conditions.

California farmers are committed to providing a healthy and affordable food supply to consumers.  Without a reliable water supply then those efforts are in jeopardy.  That is why California’s water infrastructure and conveyance systems must be modernized.”

A U.S. Department of Agriculture report was utilized in selecting the 28 high-income countries as part of the food costs study.  The report—International Evidence on Food Consumption Patterns, an Update Using 2005 International Comparison Program Data—examined factors that influenced food demand among countries with differing income levels.

A high-income country was defined as one with a per capital income equal to or greater than 45 percent of the U.S. level or per capita gross national incomes above $11,115.  The countries selected for the food costs study were:

The primary data source used for this analysis was obtained from a report published by the World Bank titled Global Purchasing Power, Parities and Real Expenditures prepared as part of the 2005 International Comparison Program (ICP). The ICP report includes a global dataset that can be used to compare economic activity and price levels between economies in different regions.  Included as part of the dataset were statistical indicators on Gross Domestic Product (GDP), total consumption spending, and food/non-alcoholic beverage spending, which were used to compare price data and estimated purchasing power parities of the world’s economies.  All of the data were benchmarked to 2005 regardless of the year in which the data were collected and all currency was reported in 2005 U.S. dollars.