The bleeding of agriculture

Approximate number of acre-feet of fresh water flushed to the ocean since December 1, 2015

It is enough water to meet the household needs of two California families for an entire year.

Every day more than 6,600 acre-feet, or more than 2 billion gallons, of precious water is flushed to the ocean. That’s enough to meet the annual household needs of over 36,000 people. Every day.

Since December 1, 2015 over 218 billion gallons has been lost – enough water for almost 4 million people for an entire year.

At the same time, electronic highway signs caution Californians to limit their water use because of the drought. What’s wrong with this picture? 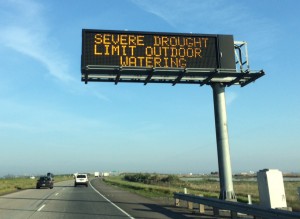 CalTrans billboard warns against water waste on the same day Congress takes testimony about billions of gallons of water flushed to the ocean because of failed environmental policies.

On February 23, the House Committee on Natural Resources subcommittee on Water, Power, and Oceans heard testimony that underscored what California consumers and farmers have known for years: that bureaucrats are wasting water that could serve farms and families at a rate of two billion gallons per day, all in a failed, misguided effort to save fish—and it is set to continue.

In less than 90 days between December 1, 2015 and February 23, 2016, 184 billion gallons of water has been flushed out through the San Francisco Bay. That’s enough water to supply over 3.3 million Californians with enough domestic water for a year, or to produce 9 billion salads. At the same time, CalTrans’ electronic billboards continue to urge people to reduce their water use.

These actions are supposedly meant to prevent harm to threatened and endangered Delta smelt and winter run Chinook salmon. Sadly, after years of trying the same tactic over and over, flushing all this water to the ocean has shown no measurable ecosystem benefits and instead resulted in a monumental waste of water.

Last April Governor Brown called for a 25 percent reduction in water usage by California’s urban residents. People responded with shorter showers, less outdoor watering, and more to meet the governor’s mandate. Urban users were joined by farmers, who had already lost between 40 and 100 percent of their surface water supplies. Even with this strong effort, farmers were forced to fallow fields, and farm workers stood in food lines because the jobs they had harvesting the nation’s food supply were gone.

Despite these cuts that have diverted water to salmon and smelt, population counts for these two fish have not improved. Yet water continues to be diverted, when it could instead be used to grow food, run a business, or irrigate a soccer field. Everyone wants a healthy environment, but there should be some accountability for the resources we’re quite literally pouring down the drain.

It is possible to protect the environment while giving people fair and equitable access to water. However, this gross mismanagement will continue unless Congress steps in.