Vice News: Telling Half Farming’s Story is Easier than Getting it Right.

In a twelve-minute video about farming, VICE News devoted just one minute to talking to a farmer. 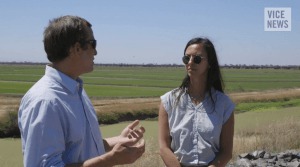 Yesterday’s VICE News “Race to the Bottom” video aims to be an in-depth piece about agricultural water use during the drought, but instead spends eleven of its twelve minutes providing misinformation about how California farmers actually grow our food.

VICE opens its video in a rice field, discussing flood irrigation with a lawyer from the Natural Resources Defense Council. Both VICE and the NRDC would have you believe that all farmers flood their fields for every crop—that’s just not true. Some farmers do use what’s more accurately called gravity irrigation…for certain crops, at certain times. Gravity irrigation has been on the decline for years, being replaced with pressure-based systems, such as drip lines and micro-sprinklers, Add that to the fact that California’s farmers have invested more than $3 billion in drip irrigation systems in the past dozen years and you begin to realize that VICE either didn’t do its homework or chose to ignore the facts.

The pattern continues at the Oakland Institute with Anuradha Mittal, who trots out the oft-repeated half-truth that “[California] is predominantly a desert.” Some of California is a desert, but the 800-plus miles of California from north to south include a variety of climates, including North America’s only Mediterranean climate, which is ideal for growing food like almonds and other stone fruit. In fact, this diversity of climate allows California to grow over 400 crops in all, with 14 being grown exclusively in California. Once again, VICE doesn’t question the assertion. It simply accepts what it has been told for what appears to be the predetermined narrative for its story. 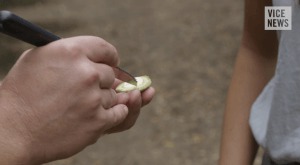 Throughout the video, VICE News attempts to convey the message that farmers are corporate fat cats hell-bent on flouting environmental measures for personal gain, but it’s simply not true. The demonized rice fields that opened the story are in fact some of the most important feeding and resting grounds that exist for millions of migratory waterfowl traveling the Pacific Flyway. Many farms do their part to manage water to avoid waste. It is often recycled through fields as many as seven times, producing the food, fiber and nursery products that are important to consumers around the corner and around the world.

Responsible journalism should be objective

Having heroes and villains makes for a nice story, but a documentary (what VICE News purports to be) should assure that its content is objective. “Race to the Bottom” casts California farmers as villains without questioning the motivations of the “heroes” they have cast themselves.