Peter Fimrite’s story in the San Francisco Chronicle (http://bit.ly/2AOyfBh) brings a positive message about higher numbers of this year’s Fall run Chinook salmon on the Mokelumne River. According to Fimrite, near record numbers of fish have returned, thanks to efforts behind stream bed and habitat improvements. 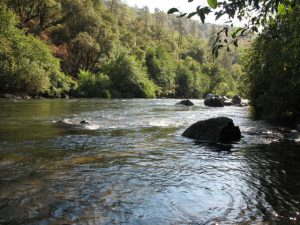 Interestingly, this success has been achieved without a massive increase in flows on the river, such as the plan proposed by the State Water Resources Control Board for the Stanislaus, Tuolumne, Merced and Sacramento rivers. Can there be any better evidence that habitat improvements are a better solution than flushing a lot of water down a river under the assumption that more water equals more fish?

The returning salmon are three years old. That means they started their journey as youngsters in 2014, a critically dry year and right in the middle of the driest period in California history. How do you explain the disconnect between big salmon numbers and low river flows? Maybe it’s not the amount of water so much as it is the quality of habitat the salmon have in the river.