Our Food Supply at Risk: White Paper on the Importance of Alfalfa Production in the American West

With drought conditions continuing to blanket the Western U.S., and farmers struggling to find adequate water supplies, competing interests are pressuring the federal government to cut the water supply farmers are using to grow our food, including alfalfa, which is a foundational food chain crop.

In response, the Family Farm Alliance and California Farm Water Coalition have produced a White Paper titled, “Our Food Supply at Risk; The Importance of Alfalfa Production in the American West” detailing the valuable role alfalfa plays as a principal feed source for the nation’s livestock and diary industries, its environmental benefits, and contribution to effective drought management. 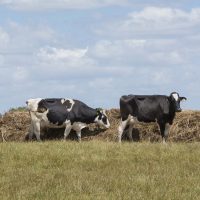 Family Farm Alliance Executive Director, Dan Keppen, said reducing the acreage devoted to alfalfa may seem like an easy fix to save water, but a decision to do so has bigger ramifications for our nation’s food supply.

“Alfalfa is grown as livestock feed for the beef and dairy industries, both of which contribute to a balanced diet, including high protein foods, such as beef, milk, and milk products, such as yogurt, butter, cheese, ice cream, and cottage cheese,” said Keppen. “At a time when consumers are facing record inflation and sticker shock every time they to go to the grocery store, it makes no sense to aggravate the problem and drive prices even higher by cutting out a vital component of our food supply.

Mike Wade, executive director of the California Farm Water Coalition, said that Arizona and California lead the nation in per-acre production of alfalfa.

“With crop yields that are double the per-acre yields in most other states, the ability to make-up lost production from Arizona and California is very unlikely, which would lead to shortages, higher feed costs for producers, and the loss of more family farms when so many are already struggling,” he said.

The report outlines many of the additional benefits that come from alfalfa production, including enhanced soil health because of deep rooting and the nitrogen alfalfa naturally adds to the soil during its growth cycle. This reduces the amount of chemical fertilizers that have to be used to grow crops that follow alfalfa during crop rotation.

Alfalfa also contributes to the health of pollinators, such as bees, when it grows because of the crop’s prolific flower production. Bees use alfalfa for honey production, more of which comes from alfalfa farms than any other source in the U.S.

And alfalfa is an efficient water user, producing a crop year-round in warmer climates, but is also able to survive droughts as well as intentional “dry down” to make water available for other so-called high-value crops, including fruits, nuts, and vegetables, that face drought-driven water shortages.