It’s the middle of May and rainfall in the northern Sierra is currently 111 percent of normal. Lake Shasta is 93 percent full and 108 percent of its year-to-date average. By all accounts there is sufficient water in the system operated by the federal government to meet the needs that the CVP was designed to serve – irrigation and municipal water supplies. But the priority for the project in the last two decades has shifted from providing water for people to being geared toward environmental demands. This almost complete reallocation of California’s federal water supply has reached a point where the people paying for the project are no longer able to rely on it to serve their needs.

The ripple effect reaches an area in excess of 3 million acres (1.2 million hectares) – more than one-third of the irrigated cropland in California. In contrast, California’s other large water supplier, the State Water Project, is delivering a 60 percent allocation to its customers. Many other areas of the state are on track to receive 75– 100 percent of their normal water supply.

Water districts find themselves in the same position as Oliver Twist asking for an additional spoonful of gruel – and it’s looking less likely that they will get any.

The newly styled CVP management impacts go far beyond the farms receiving the pittance of water being delivered to the San Joaquin Valley. The kicker is that without farmers paying for irrigation water the repayment of the construction costs of the CVP falls behind, and operation and maintenance (O&M) costs escalate for other users within the CVP. Federal water users in Northern California have seen O&M prices more than double because they end up carrying a greater share of those costs when water supplies are shorted elsewhere in the state.

What is occurring is a slow-motion train wreck. Much of the blame can be placed on federal fishery managers overseeing the Sacramento-San Joaquin Delta with a myopic view of what constitutes effective protection for Chinook salmon and delta smelt. Water supplies have been cut over the last 24 years in favor of fishery management but the fish aren’t doing any better. In fact they’re worse off than they were before the U.S. Fish and Wildlife Service stepped in after Congress passed the Central Valley Project Improvement Act in 1992.

According to Dr. Sean Hayes of the National Oceanic and Atmospheric Administration (NOAA), the awareness of other stressors is now more prevalent, which includes invasive species, predators, poor ocean conditions and the loss of salmon and smelt-rearing habitat. Yet fishery managers continue to limit farm water deliveries on the Sacramento River and through the Delta as their only tool to try to protect the fish. 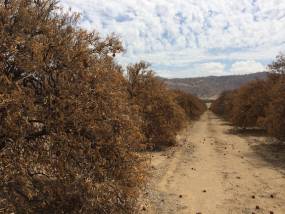 Citrus Trees Lost Due to Drought and Water Supply

A mild shift in how we manage the problems affecting the Delta can pay big dividends in the future. Fishery managers need to pay attention to emerging science. Allowing unlimited fishing for predators in “hot spots” where they are known to congregate can help salmon in the short term. Investing in tidal marsh habitat will provide more natural areas for young salmon and delta smelt to grow, giving them a fighting chance for survival and reproduction. And installing a barrier at the head of Old River will help maintain a more natural flow through the Delta, keeping fish on track during their migration.

Taxpayers have shelled out hundreds of millions of dollars in this failed effort, both in direct costs supporting the Endangered Species Act and in aid to families displaced when farm jobs and the water that supports them are taken away. It’s time for a comprehensive look at how we manage our water resources. The taxpaying public, water users, local communities and our environment deserve better.