The best it gets? Responses to South-of-Delta CVP Allocation Announcement

Many contractors in the CVP are scratching their heads at the latest USBR allocation announcement for South-of-Delta deliveries that was finally released late in the farm planning season.

In the wettest year on record, with approximately 200% of average precipitation, a lot of people are asking questions-

Why is the allocation only 65%?

Why did the announcement come so late?

If this is a record-breaking water year, what will normal years look like?

How can the system be so broken?

Read the responses from some of those impacted:

Watch a television interview with a farmer on the topic.

You can’t make this stuff up

While California water officials deal with historic flooding and neglected infrastructure as well as emergency efforts to protect people and property from the next storms, our federal bureaucracy is also hard at work. Except its hard work is directed at putting up roadblocks to the very emergency repairs California officials are rushing to complete.

The California Department of Water Resources stopped releases from Oroville’s main spillway on Monday, February 27 in order to begin dredging soil and concrete that are blocking Oroville’s power plant. Getting the power plant back on line will help regulate releases from the dam during the remainder of the rainy season, which will enhance public safety.

The NMFS letter makes 22 requests that it believes would minimize the effect on anadromous fish species and habitat on the Feather River. Those recommendations include:

There are more storms on the horizon as well as a record snowpack eager to melt this spring. Time is of the essence. DWR was right to shut the spillway and begin work as soon as possible in order to begin the clean up. The 180,000 people who evacuated two weeks ago should not be held hostage to a bureaucratic process that will slow progress on repairing the storm damage.

“This winter’s record-breaking storms have tested our state and its infrastructure in ways no one could have predicted.

The past week has been particularly frightening for people in and around the City of Oroville. We’d first like to say how glad we are that hundreds of thousands of people were able to safely evacuate and that the emergency spillway helped provide the necessary time to do so. 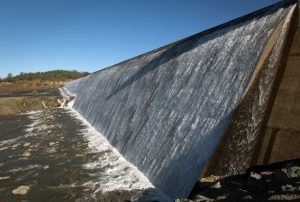 There has been a lot of finger-pointing and talk about whether the structure should have been made even stronger.

Unfortunately, facts sometimes get lost in a crisis. As was pointed out by Jeffrey Mount of the nonpartisan Public Policy Institute of California, the Oroville structures had successfully handled the big flood of 1997. The emergency spillway as well as the dam itself were re-checked and re-licensed a decade ago, and deemed safe and capable of handling what at the time, experts believed would be the worst-case scenario.

It’s also important to point out that the spillway in question was an extra precaution taken in addition to the regular overflow mechanisms. The licensing agency, the Federal Energy Regulatory Commission (FERC), even noted that in an extreme event, some erosion of the emergency spillway would be likely. In other words, it performed as expected.

California is facing an unprecedented amount of rain and snowfall this year, well above the wettest year in the state’s recorded history. Precipitation in the Northern Sierra this year is 221% above average.

We applaud the swift work of government officials, are delighted to hear the evacuees are now returning home and look forward to rolling up our sleeves and working with all involved toward an even more secure water future.”