Snow Survey Results Off the Charts- Must Improve Water Supplies

When state snow surveyors visited the Sierra Nevada today, they found a snowpack well above average for the date, and the biggest in more than 20 years. California agricultural organizations say they hope that translates into improved water supplies for the state’s farmers and ranchers. 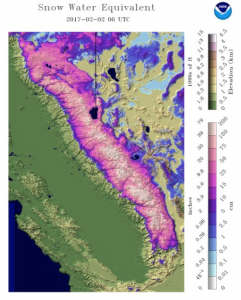 Map showing how much water is in the Sierra snowpack today.

“You would think that a snowpack in the range of 175 percent of average would assure plentiful water supplies, but that link has long ago been severed,” said Tom Nassif, president of the Western Growers Association.

“Wildlife agencies often hold the key to determining how much water is available, because endangered-species laws reserve
water for protected fish.”

WIIN Act Can Help Maximize the Benefits of California Storms in 2017 and Beyond.

Nassif noted the passage of federal legislation called the Water Infrastructure Improvements for the Nation Act,
which included short-term provisions to increase flexibility of the state’s water system.

“Among its provisions, the WIIN Act allows water agencies to capture more water during winter storms and requires them to maximize supplies consistent with law. This winter will be a good test of how agencies adhere to that law,” said Paul Wenger, president of the California Farm Bureau Federation.

Proposition 1 Water Bond Reservoirs Would Save Storm Water for Families, Farms, and Environment

The WIIN Act also invests in California water storage and desalination projects, complementing the investments California voters made when they passed the Proposition 1 water bond in 2014.

“We’ve had to let too much water run out to sea this winter, because we didn’t have any place to store it,” said Bill Diedrich, president of the California Farm Water Coalition. “We should be doing everything we can to save today’s rain and snow for use tomorrow.” 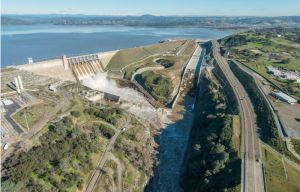 The California Water Commission will decide later this year on water projects to be funded through the bond.

“We will continue to urge the commission to put that money to work as quickly as possible to build new storage facilities that can capture more water during future winters such as we’ve seen in 2017,” Diedrich said.